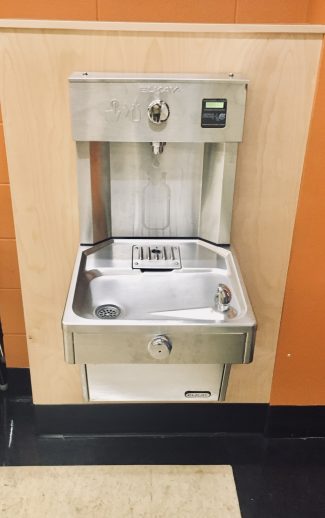 The District has been actively moving towards the Vancouver Island Health Authority (VIHA) mandate of less than 0.005 mg/L lead in school drinking water. To achieve this, the District has installed filters at each expected point of use for drinking water that exceeded the acceptable threshold in our initial testing in July 2016.

Once filtration was installed, drinking water was tested again.  Those points of use for drinking water that still tested above the acceptable limit have had or are having their faucets and piping replaced with lead free materials in an effort to achieve the mandate levels.  VIHA has accepted a temporary measure while our lead mitigation strategy is put in place to allow for use of a drinking source if after a 30 sec flush the test results are below the 0.005 mg/L mandate.  We have posted notification on each source in the District that still requires a flush to remind users of this practice.  Any expected drinking source that does not meet the mandate even after a 30-second flush has been shut off until lead mitigation can be installed.  Once installed, further testing will take place to determine the result of this mitigation before re-opening the source.

All faucets, fountains, and sinks that are not expected to be sources of drinking water have signage posted indicating the water is not potable.  An example of a non-potable source would be a hand washing sink in a washroom or classroom sink.

The Ministry of Education has mandated that 1/3rd of all sources need to be tested each year.  Once all sources have passed a standing water test by meeting the VIHA mandate, the Greater Victoria School District will test all sources annually.  The report shown is sent to the Ministry and VIHA once every year as we work with them to continually move toward 100% compliance throughout the District.