What are the goals of the Early French Immersion Program?

Elementary Early French Immersion is offered at the following schools:

Middle School French Immersion is offered at the following schools:

Secondary French Immersion is offered at the following schools:

Most children entering Kindergarten know very little or no French. A child needs prior knowledge of French to enter the Early Immersion Program after Grade 1. Transportation, if required, is the responsibility of the parent. French is the language of instruction in all French Immersion classes. The chart featured below highlights the percentage of French used by grade level.

Registration takes place at the same time as Kindergarten registration for the English stream. To register, contact your French Immersion catchment school.

How can I identify my French Immersion Elementary School?

How much French will my child speak in the classroom? 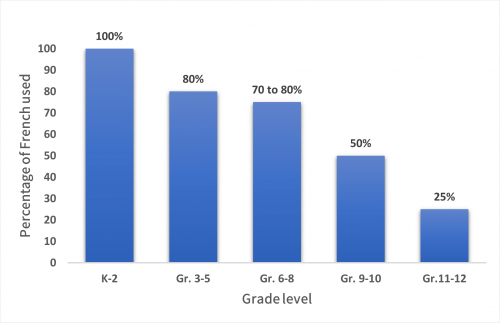 Kindergarten is 100% French. English may be used at the outset to establish routines. English is used only if necessary in exceptional situations after this. The subjects studied in French may vary slightly in Grades 4 to 12, depending on the specialization areas of the teacher.

Do children read and write in English and French?

Pre-reading exercises in Kindergarten are in French; reading and writing begin in French in Grade 1. Formal instruction in English Language Arts begins in Grade 3, with one hour a day.

Is transfer to an English class possible?

A transfer to English can be arranged at any time on parent request.

Do children in French Immersion learn the same things as those in English classes?

Research carried out throughout Canada has resulted in very similar findings to those of Dr. Stan Shapson, Dr. David Kaufman and Ms. Elaine Day of Simon Fraser University.

The main findings are:

How much French do the children learn?

While comprehension of French comes quickly in Kindergarten, the ability to speak comes much more slowly, particularly fluent speech sentences. However, during Grade 1, children begin to communicate spontaneously with one another in French.

Is learning assistance available in French?