Victoria High: Planning for the Future 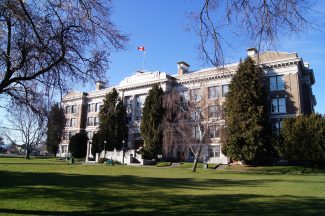 Victoria High School will be seismically upgraded and the iconic exterior of the oldest high school in Western Canada will remain intact.

The Government of B.C. is providing $77.1 million for seismic upgrades and a 200-seat expansion of Victoria High to keep students safe and ensure they are not attending an overcrowded school. In addition, the upgrade will include a new neighbourhood learning centre for childcare programs.

The Greater Victoria School District is contributing $2.6 million to the project. Construction on the upgrades and expansion at Vic High is expected to begin in August 2020. Students will be re-located to a renovated SJ Willis while the project is underway. This will minimize disruption to students by contractors, and students will be in a safer school as soon as possible. The work on Vic High is scheduled to be completed by September 2023. For current updates see Seismic Projects.

In April 2018, an extensive public consultation process was launched to provide an opportunity for the community to learn more about the options and provide input about what’s important to them when planning for the future. More than 1,700 people participated in the open houses, staff and student events and an online survey.

There were a number of considerations when planning for upgrades to the high school including educational needs, capacity, and student enrolment projections. Other considerations included operating and capital costs, heritage, environment, community values, and community amenities. There was a range of options presented to the public, including a full seismic upgrade, building a new high school, or retaining the exterior facade and rebuilding the interior.  See Vic High Backgrounder for option details.

All of the input provided on the potential options was compiled into an Engagement Summary Report for the Board of Education to review. After considering the input from the public and stakeholders, the Board of Education directed the Superintendent to further explore the costing of specific options. These options included Seismic with Enhancements, Seismic Plus with Enhancements and additional capacity, and a new build.

At the Board Meeting on June 25, 2018, Trustees voted to submit the ‘Seismic Plus Enhancements (1000) Plus NLC’ Option to the Ministry of Education for approval.

‘Seismic Plus Enhancements (1000) Plus NLC’ Option

The ‘Seismic Plus Enhancements (1000) Plus NLC’ Option includes upgrading the 1914 building to meet current seismic safety standards. The option retains the exterior of the current building while enhancing the interior. The biggest change will be the modernization of learning spaces for staff and students.

Other upgrades will include new concrete stairwells, upgrades to the mechanical systems, and the installation of a new fire sprinkler system. The option also involves building a two-storey addition on the east side of the school that will accommodate 200 more seats, increasing the school’s capacity to 1,000 students. A Neighbourhood Learning Centre will also be included to provide space for community-based programs and services.

The estimated cost of the ‘Seismic Plus Enhancements (1000) Plus NLC’ Option is approximately $79.7 million; this includes the addition of a Neighbourhood Learning Centre, which would cost approximately $6 million. Planning will take approximately one year and then construction will occur over two school years. Construction on the upgrades and expansion at Vic High is expected to begin in August 2020. Students will be re-located to a renovated SJ Willis Education Centre while the project is underway.

Proceeding with a higher cost seismic option and the desire to create additional capacity, the Board is expected to contribute funds above and beyond what will be received from the Ministry of Education for the project. The Greater Victoria School District must contribute $2.6 million to the project.

The District is exchanging lands with the City of Victoria and then leasing lands to the Capital Regional District (CRD) as an expansion to the current lands leased to the CRD, in order to contribute $2.6 M to the project. The District is trading the Springridge Commons Site, the Compost Education Site and two lots adjacent to Haegart Park to the City that will remain in their current form. The District will acquire all of the lands that were previously under the Ferrie Technical Building and those that are currently gravel. Presently, some of the titles in that area remain under the ownership of the City of Victoria and BC Housing. These lands will be consolidated with the lands currently leased by the CRD. The consolidated lands will then be leased for 60 years to the CRD. In addition, an eight-metre easement will be granted to the CRD to create a public path and buffer between the school and the housing development.

The District consulted on the disposition of lands near Victoria High School. A summary report of “What We Heard” was shared with the Board of Education to review before making a decision on the land exchange and lease. Please see the report listed under resources.

Approving the land exchange and lease with government partners is providing the School District with an additional $1.5 – $1.9 million to put towards potential amenities and enhancements at Victoria High. Prior to solidifying design plans, the District invited students, staff, parents and members of the public, to share their input on what type of enhancements they would prefer to serve the school and community.

The District created a visioning group to gather input from local organizations and members of the public to help reflect the desires of the community into the design process. The visioning group reviewed and provided input into the creation of a survey. Over a four week period, the District hosted an online survey to gather input on potential amenities and enhancements.

Following engagement on potential amenities and enhancements, the District provided recommendations to the Board that prioritized safety, instructional use and reflected the desires suggested by the public. On March 9, 2020, the Board of Education approved budget allocations for amenity improvements that are beyond the scope of what is included in Victoria High’s seismic upgrade project. The District is now currently in the design process.